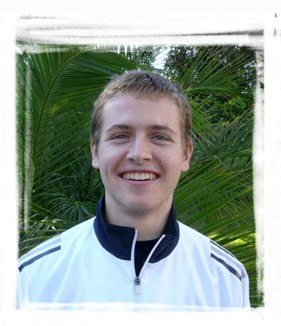 Geoffrey started fencing in 2004, as he says “…because of peer pressure. I was taking swimming lessons at the time and hated it. Many of my school mates were taking fencing and I wanted to start fencing, too. I convinced my mom that it would be fun to take this class over the summer”. His coach, Brenden Richard of South Coast Fencing Center, inspired Geoffrey from the very beginning. That summer he suggested to Geoffrey to watch fencing on TV (the Olympic Games from Athens). Geoffrey just fell in love with the sport. When Geoffrey became a teenager Brenden suggested to him to pursue his fencing dream and explore more challenging training. Geoffrey started his 50 miles commute four times a week and began training with Coach Daniel Costin and the AGFC team. His dedication to the sport has shown great results. When asked which his best result is Geoffrey is torn to choose between the 5th place at a cadet world cup at the end of January in London GB and his results (2nd place in both junior and cadet events) at the 2011 USFA Junior Olympics which qualified him to the 2011 Junior & Cadet World Championships.